Implicit bias refers to the attitudes or stereotypes that affect our understanding, actions, and decisions in an unconscious manner.

After reading about implicit bias in That’s What She Said: What Men Need To Know (And Women Need To Tell Them) About Working Together, I decided to take the Implicit Association Test that Harvard offers.

There are many different biases to test for, including gender, age, sexuality, weight, race, countries and skin-tone. I vaguely remember taking this test in high school, can’t remember any concrete details though. Since I rediscovered this test through That’s What She Said, I’ll take the gender test today.

The rules of the test are quite straight forward:

What happens is that the word HUMANITIES is put in the left hand corner of your screen while SCIENCES is put in the right hand corner. Then a word flashes in the middle and you have to press the key ‘E’ if it matches the category on the left (HUMANITIES) and the key ‘I’ if it matches the category on the right. So far, so good: but this is just the warm up.

Then it does the same for MEN on the left and WOMEN on the right, showing gendered words for family like GIRL, FEMALE, or FATHER. Both of these tests are probably used to get a baseline reading on your reaction time. Now the important part occurs. It combines the previous two trials and puts HUMANITIES / MEN on the left and SCIENCES / WOMEN on the right. You sort them depending on which side they match. I found this to be tricky, because one of the instructions was to go fast. I short circuited thinking fully and just relied on my impulses, getting quite a few wrong in the process.

Then, the same three tests were repeated, but things were switched up. They put HUMANITIES and SCIENCES on the same sides alone, but then they had MEN and WOMEN switched. When the third trial in this second round came, MEN / SCIENCE was on the right and WOMEN / HUMANITIES was on the left. This round felt much easier than the first round. I allowed myself to use gendered stereotypes to increase my speed. I felt that it was easier to identify sciences with male and humanities with female.

I wonder if my test results confirm my suspicions?

What is especially interesting is Harvard also gets me to fill in a questionnaire before and after I get my results. It directly asked me what association I believe I have a bias towards. After it gave me my results it then asked me to identify factors that may have influenced my results. It also questioned how I interpreted these results once I had received them.

Let me explain how I interpreted my results. I could respond to each of the four points individually, instead here’s one response that should explain all four of them.

My IAT score reflects the culture that I am exposed to, but it also definitely represents me personally. I was the one that took that test, and I did find it easier to associate men with science and women with humanities. I strongly disagreed with this statement because I don’t want to distance myself from the reality of the situation just to make myself feel better. It is a pretty good reflection of my unconscious thoughts and feelings. Being forced to make fast decisions forces you to short circuit your “System 2” and gives your “System 1” the controls, as elaborated on in the book Thinking Fast and Slow by Daniel Kahneman. System 1 is fast and emotional, while System 2 is slower, deliberate and more logical. Kahneman’s research is fascinating and explores our heuristics and biases: how we make decisions. His work came out of his fascination with why humans struggle to think statistically, and is a spellbinding subject in and of itself.

After I had finished answer these questions, Harvard shared with me the average results of a participant. 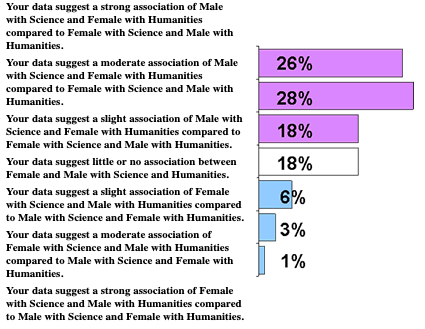 These results are easy to digest with pretty colours, below is the nitty gritty breakdown for those of you who are interesting in statistics. If you are curious, or have specific question about this experiment, check out the FAQ. Even if you don’t have a pressing issue, it’s interesting to see all the angles that this study considered. 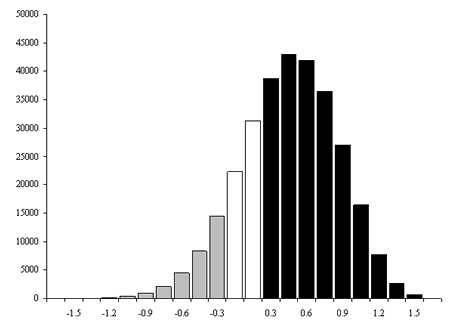 This distribution summarizes 299,298 IAT scores for the gender-science task completed between July 2000 and May 2006. The dark bars indicate faster sorting of Males with Science and Females with Liberal Arts, gray bars indicate faster sorting of Males with Liberal Arts and Females with Science. The bar height indicates the number of people who scored within that range. The IAT effect (a D score) has a possible range of -2 to +2. Break points for ‘slight’ (.15), ‘moderate’ (.35) and ‘strong’ (.65) were selected conservatively according to psychological conventions for effect size.

To summarize, I have a moderate association with men and sciences / women and humanities compared to the reverse of those pairings. However I pride myself on striving for equality so this isn’t exactly what I want to see.

In the modern age we are bombarded with so much information that our brains can’t keep up. How do we, the owners of said brains, keep up then? We reduce and simplify the information we receive. And the best way to do that? Lean into our biases and understanding of the world. We pattern match what we see against the experiences that we’ve had. Defaulting to your bias is easy, and effective most of the time. But stereotypes never apply to everyone, and can be incredibly harmful when people assume that they do. So what can we do?

Awareness. Being aware of your biases is the first step. This isn’t the only step though. Becoming aware doesn’t let you off the hook for the hard work it will take to combat these biases, some of which you don’t even know (or want to acknowledge) that you have. Only once you are aware and accept that you have implicit biases, can you begin to strive for equality.

If you have never missed a flight, you are probably wasting your time.

The best stories include nachos, right?