Most of my blog posts involve some amount of Googling, so here’s where I started for this one. 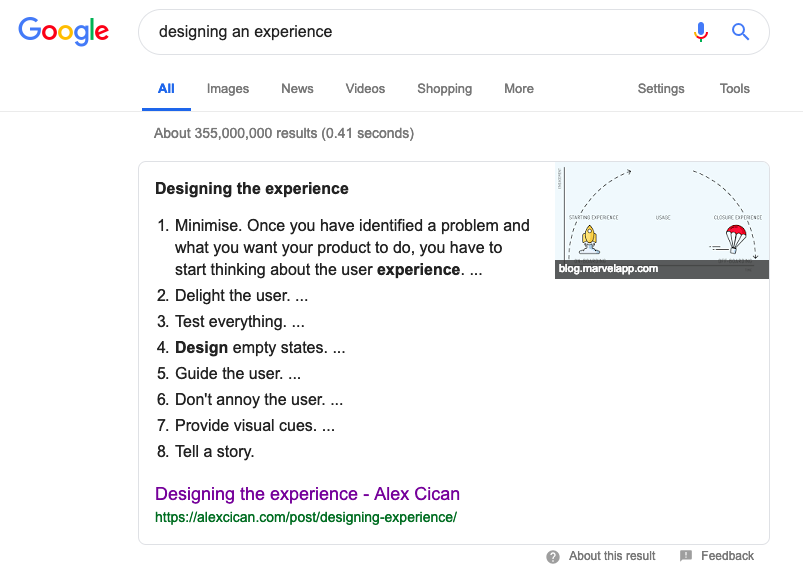 This result got me thinking, how would I apply those 8 principles to designing my life.

I am a firm believer that less is more. When you do less, you are more deliberate in your actions and the impact gets magnified. There is a danger in over stretching yourself where you become a jack of all trades but a master of none. I believe that mastery is as important as being well rounded. A healthy balance is what I strive for.

This also ties into my anti-consumerism philosophy. I don’t want stuff to define me. I am not interested in status symbols and whatnot. I want to live a life that has value to me, and part of that value derives from not leaning on physical goods. Retail therapy is a very real phenomenon that I have never taken part of. Call me frugal, but I don’t enjoy spending money on goods. I prefer spending money on experiences, the stuff I can’t take with me.

Simply put, have fun! This isn’t just your own delight though, go out and delight others. You can make an argument that everyone is inherently selfish and any seemingly altruistic act is just scratching that altruism itch that ultimately makes you feel good. Even if you please others because it makes you feel good, lean into that. Reveal in making others happy, because someone might just do the same to you (not the point, just a happy little side effect).

Life is all about the happy little side effects

Everyone has their own lens that they view the world through. We have tons of simplifying assumptions that make life manageable. However, these assumptions are not always right. You probably think that all your beliefs are true (they are your beliefs after all). Statistically, you currently hold beliefs that are inaccurate. People will generally accept that fact. However, if you have to identify beliefs that you currently hold that are inaccurate, that’s a much tougher idea to come to terms with. Personally I believe that my world view is accurate. However, to counteract my own blind spots, I actively seek out dissenting views and try to figure out where I am wrong.

When I read the book Never Split the Difference, it described how people generally approach negotiations. Usually both parties come to the table armed with facts that back up their point of views. Their mindset is that they are right, and it is their job to convince the other person. Any time they are challenged, they dig their heels in because it’s a competition (there’s a winner, right). Think about that for a second though, both come to the table with the same mindset. Neither think that their view of the world is incomplete and that they will gain insightful and potentially revelatory information from the other. Both are trying to change their other without budging personally.

What if you approached arguments with the mindset that you might learn something. What if you viewed it as testing your own world view instead of changing theirs.

Managing your leisure is as important as managing your work. I’m not advocating for a 12 step plan for how to relax, but knowing what you want to do when there’s nothing you have to do. If that’s watching TV, that’s great, entertain yourself. Are there shows that you want to binge or catch up on. What sport do you want to follow or get into? Have you always wanted to read more books? Try knitting perhaps?

What about the time in between events? Do you want to pass the 10 minutes until your next meeting with social media scroll, or perhaps a walk outside.

Self control is hard. Habits make it easier.

Guide yourself by making it the easiest thing to do. Put your alarm clock on the other side of the room so you have to get out of bed when it goes off. Make it as annoying as possible. Have your phone charge out of reach from your bed. Have a routine where you limit screen time 30 minutes before you sleep, or have a relaxing activity you do every night before you sleep. Going to bed at a reasonable hour / falling asleep fast / waking up on time can be very hard, but it doesn’t has to be.

Guide yourself with some intentional triggers. Set time limits on apps that you don’t want to lose half your day to. Put your phone out of reach while working. Silence your phone while spending time with people you care about.

Take a wild guess what I’m trying to assert self control over.

Not only can you take steps to delight yourself, you can take steps to remove PITA (pain in the ass). Also, just don’t be a dick to others. There are a lot of moral frameworks that attempt to distinguish right from wrong. If you’re not a fan of reading moral philosophy papers from Kant or Hume, that just strive to not be a dick. It’s really easy to remember and can apply to any scenario!

Honestly I didn’t read the entire list when I decided to write this article, and now that I’m a thousand words in I have to make a tenuous connection for this one.

The space you live in affects how you feel on a day to day basis. Call it Feng Shui or Interior Design, the space around you matters. You may not have to go as far as leaving holes in buildings for dragons to fly through, but at least have some art on the walls that makes you happy when you look at it.

Humans love a narrative. In Sapiens, Yuval Noah Harari argues that the competitive edge that humans have over every other species on earth (because admit it, we won) is a result of our ability to communicate. Communication and narratives allowed groups of humans to cooperate and work together, becoming more powerful than the sum of the parts.

Inspiration can come from anywhere. Take it from me that a listicle on the first page of a google search is totally valid. I am a firm believer that we can all strive to live better. Design the life you want deliberately, and maybe you’ll wake up one morning (with your alarm clock on the other side of the room) and find that you’re living it.

In this day and age, where would we be without the maps on our phone? Well, probably not where we wanted to go.

Posting on Instagram has become a science. A carefully measured exercise to maximum engagement.